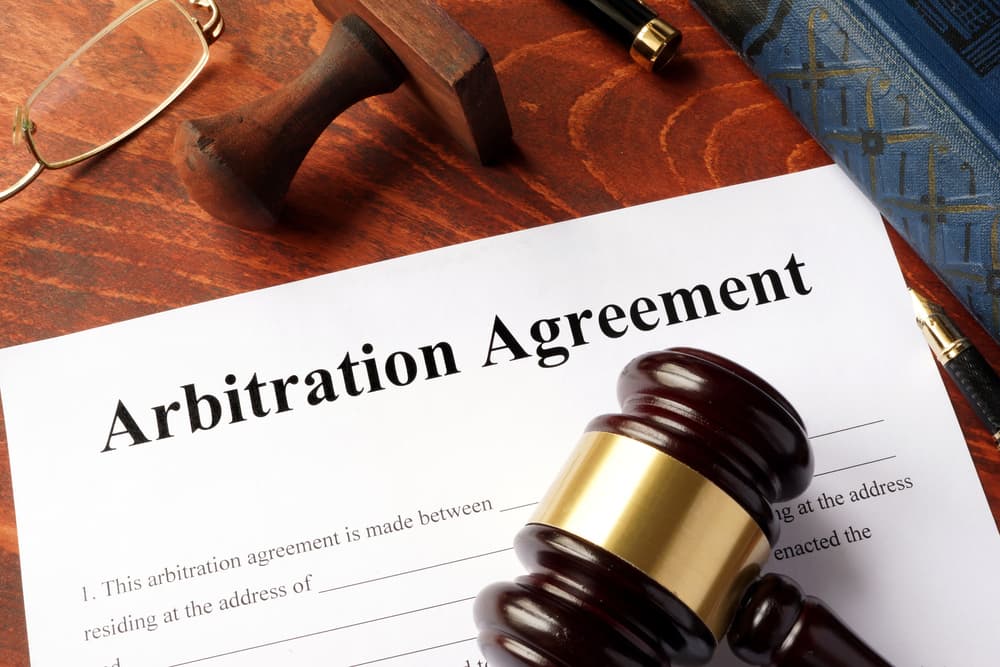 All capable persons can subscribe to an arbitration agreement on the rights of which they have free disposal.

However, we cannot compromise:

– on donations and bequests of food, clothing and housing;

– on matters concerning the condition and capacity of persons;

– on questions of public order and in particular:

– disputes involving the application of a tax law;

– disputes concerning nullities and the dissolution of companies.

The compromise must always be in writing:

It can be the subject of a report drawn up before the chosen arbitrator (s), of an act passed before a notary or adoul or even of a private deed, according to the will of the parties.

The parties may, in any contract, agree to submit to the arbitrators’ decision the solution of any disputes which may arise during the execution of the contract.

They can, moreover, when the contract concerns an act of commerce, designate in advance in the convention itself, the arbitrator or arbitrators. In this case, the arbitration clause must be handwritten and specially approved by the parties, on pain of nullity.

The powers of the arbitrators, whether appointed by the parties or by order of the president, expire within the time limits provided for in article 308.

The revocation puts an end to the powers of the arbitrators and any award they would have rendered, after their revocation, would be null even if they had not previously been notified of their revocation.

The parties and the arbitrators follow in the proceedings the time limits and forms established for the courts of first instance, if the parties have not agreed otherwise.

The arbitrators are required to participate together in all the work and all the operations, as well as in the drafting of the minutes, unless the parties have authorized them to entrust one of them with the execution of the proceedings. one of these formalities.

2 ° By the expiration of the stipulated time limit or that of three months if no special time limit had been fixed;

3 ° By sharing opinions, if the arbitrators do not have the power to hire a third arbitrator;

4 ° By the death of one of the parties, if the latter leaves one or more minor heirs;

5 ° If before the pronouncement of the arbitration award, one of the parties has become incapable.

Arbitrators may not renounce their mission if their operations have started under penalty of damages for the benefit of the parties in compensation for the damage thus caused by their fault.

They cannot be challenged, except for a cause that has arisen or discovered since their appointment; if a false entry is made, even a purely civil one, or if some criminal incident arises during the arbitration, the arbitrators suspend their work until the incident has been resolved by the ordinary courts and the time limit is suspended and does not begin to run again until the day on which the incident has been definitively settled.

Each of the parties is required to produce its documents and its means of defense, at least fifteen days before the expiry of the arbitration period; arbitrators are only required to rule on what has been produced to them.

The divided arbitrators are required to draw up their separate and reasoned opinions, either in a single report or in separate reports.

In the absence of any stipulation in the compromise or in the act appointing the third arbitrator, the latter is required to rule within the month following its acceptance.

The third arbitrator is informed by the opinions of the shared arbitrators and by the conference held by him with them; he may, moreover, order new investigative measures, but he must limit himself to indicating which of the divergent opinions appears to him to be the best and his award must express the choice thus made, even if, in the absence of the arbitrators summoned to to meet, he has to decide on his own.

If the appointed arbitrators had the power to rule as amiable composers, the same applies to the third arbitrator.

The arbitration award must be in writing, contain a statement of the parties’ claims and an indication of the disputed issues resolved by the award, as well as a mechanism ruling on these issues.

It must be signed by the arbitrators, specify their identity, and mention the date and place where it was returned.

The arbitrary award is not, in any case, subject to appeal.

The arbitration award is made enforceable by order of the president of the court of first instance in whose jurisdiction it was made.

For this purpose, the minute of the award is filed with the registry of this jurisdiction by one of the arbitrators within three days of its pronouncement.

If it has been compromised on the appeal of a judgment, the arbitration award is filed with the registry of the court of appeal and the order is issued by the first president of this jurisdiction.

The costs relating to the filing of requests are payable by the parties and not by the arbitrators.

The decision of the president of the court of first instance may be appealed in the ordinary forms, within thirty days of its notification, unless the parties have waived this remedy in advance, that is to say during the designation of the arbitrators, either since this designation, but before the pronouncement of the award.

This appeal is brought before the court of appeal. The territorially competent jurisdiction is that in which the arbitration award was made.

The appeal court rules according to the ordinary rules.

The rules on the provisional enforcement of court judgments are applicable to arbitral awards.

Arbitral awards, even accompanied by the exequatur decision, are not enforceable against third parties, who may however make third party opposition under the conditions provided for by articles 303 to 305.

Arbitral awards may be the subject of a request for retraction before the court which would have heard of the case if there had not been an arbitration agreement.

The cassation appeal is open against the decisions rendered in last resort, either on a request for retraction, or on appeal of the judgment granting or refusing the exequatur, as well as against the order of the first president of the court of appeal rendered by application of paragraph 3 of article 320.